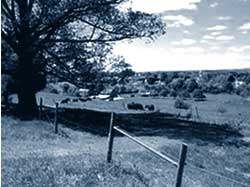 John Winthrop was the original member of his family to settle in Massachusetts. He was born in Suffolk, England on January 22, 1588 and his father, Adam Winthrop, was the lord of Groton Manor, a small estate in the English countryside.

In the spring of 1630, John Winthrop led a fleet of eleven vessels and seven hundred passengers — The Winthrop Fleet — to the Massachusetts Bay Colony in the New World, the greatest fleet ever assembled to carry Englishmen overseas to a new homeland.

Winthrop was elected governor of the Massachusetts Bay Colony and was re-elected many times. He is most famous for his "City on a Hill" sermon in which he argued that the wealthy of the community had a duty to look after the poor. He died in Boston on March 26, 1649 and the Town of Winthrop, Massachusetts, is named after him. His son, John Winthrop, became Governor of Connecticut.

The strength, integrity and entrepreneurial spirit embodied by John Winthrop have inspired Groton Partners. It is from the Winthrop Family property on Long Island, which is called Groton Estates, that we took the firm's name.